LOCATION: Inside Laughlin Park on the south side of Waynesville, MO.

SIZE: Ranked as the 16th largest spring in the state with an average discharge of 37 million gallons of water a day.  View the stream gauge here.

OWNERS: Owned and maintained by the city of Waynesville, the spring is a certified site on the National Park Service National Historic Trail as an encampment on the Trail of Tears.

1969 -Don Rimbach with the help of John Viper cleared the spring opening and were the first known divers to enter the spring. They explored and sketched the tunnel back to the “Pit” area, which we now call the first drop-off. Don had a chance to buy the spring from a man named Shindler in 1974 for $2,000. At the time funds weren’t available.

The Pulaski County website has some more interesting information on early exploration efforts exploring the spring in the 1970’s here.

1977 -Roger Miller heard about Roubidoux spring from reading a note in an NSS newsletter, which had Don Rimbach’s phone number. After contacting Don to get the location of the spring, Rodger and Frank Fogerty explored Roubidoux in the 1970′s and mapped the spring back to approximately 1,400′ or the start of the “Big Room”. On one of their survey dives they got turned around while relocating the line and went the wrong way (hence the name “Which Way Tunnel”). You can see their map here.

1980’s – Dave Porter and Rodger Gliedt explored Roubidoux past the Big Room using scooters. Along with Frank Howard they mapped the upper tunnel to the first drop and also installed the first “STOP” sign.

1990’s – Kurt Olsen, Mike Husack, Dave Porter, Doug Chappell and others conducted exploration dives in Roubidoux in the 90’s. Most of these dives were on air with O2 for deco. The most publicized dive being a dive team of Kurt Olsen and Robert Laird in August of 1996 in which they discovered a large room past the third drop-off. Olsen and Husack with the help of Bill Morrison and Paul Kaufman surveyed and created a map of Roubidoux out past 2,500’. You can view their map here.

1997 – Jason Weisacosky and Tom O’Connor start exploring and surveying Roubidoux from the end of the Olsen/Laird line.

2000 – OCDA members replace 700’ of damaged exploration line from the 2,000’ penetration area to aid in ongoing exploration and surveying operations.

2001 – The OCDA decided to make the on going work to map Roubidoux an official project, and present a finished copy of the map to the local authorities in appreciation of past and continued access. It is also decided to make the map publicly available to promote awareness and safety to divers using the site. Exploration continued with the greatest emphasis directed towards surveying and mapping the already explored parts of the spring.

2002 – The OCDA explored Roubidoux spring to a total distance of over 5,800’ at depths up to 265′. Survey data was gathered on the newly explored sections along with two side tunnels and were compiled onto a map. Since this point in time conditions have never really stabilized long enough for visibility to return to normal. Water clarity has started going downhill and may be associated with new construction going on upstream in the spring’s recharge area. At this time dives were in the 6-7 hour range on open circuit using 4-6 stages. Heater shirts became a requirement. The 2002 map can be viewed here.

2007 – The OCDA completes new habitat construction in the cavern zone in preparation for renewed exploration and survey of the far reaches of the system. The old habitat design was outdated and having reached the end of it’s useful life was removed from the system. 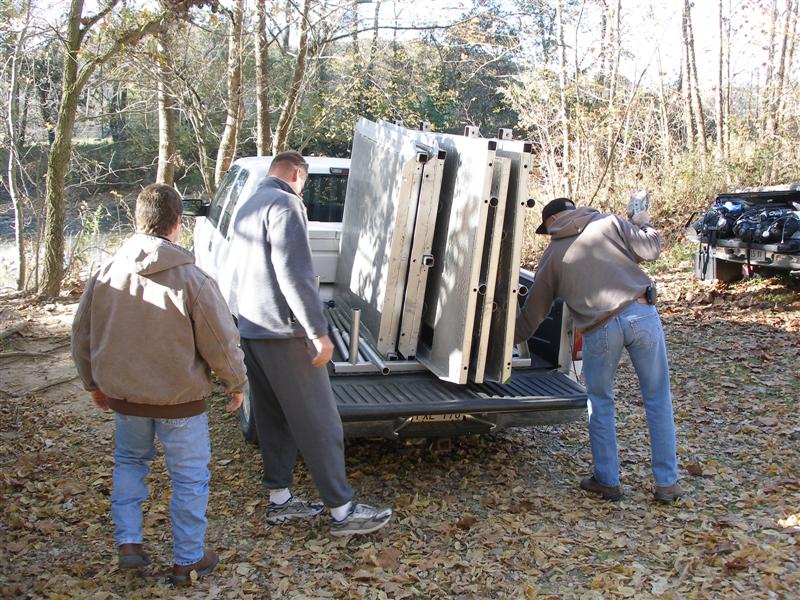 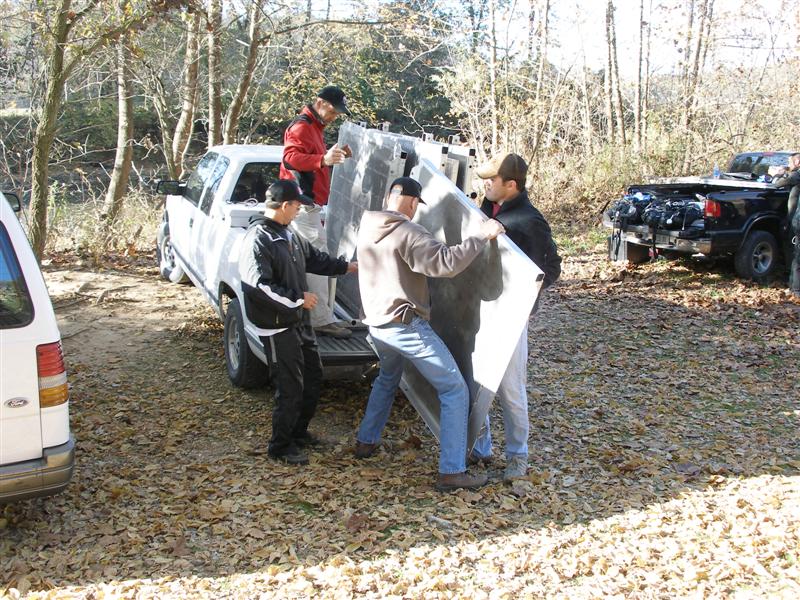 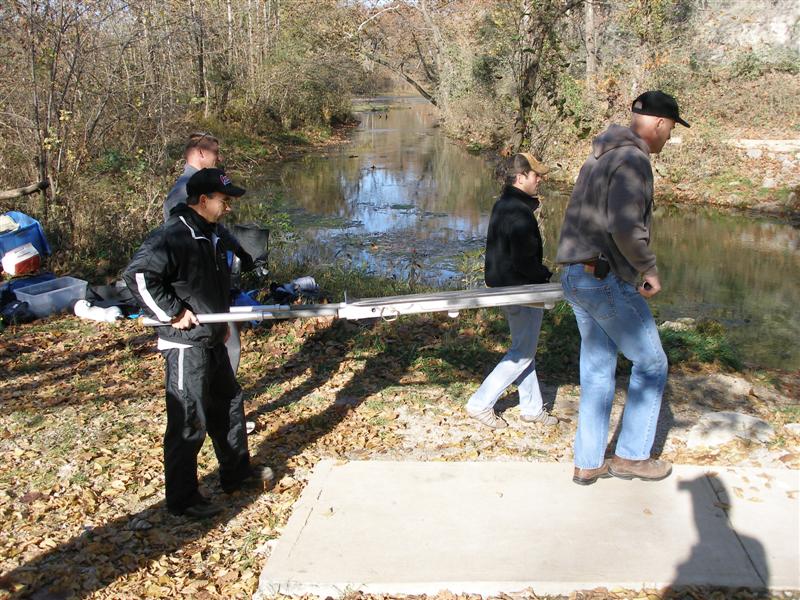 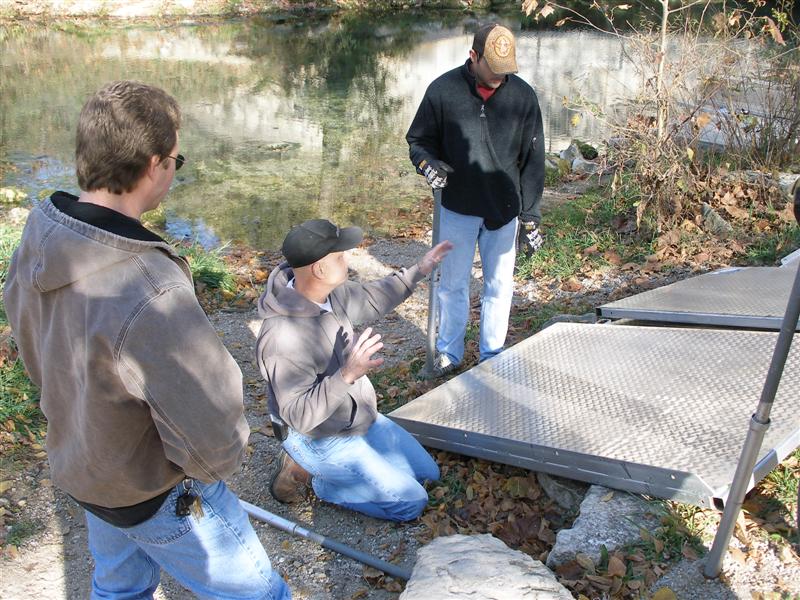 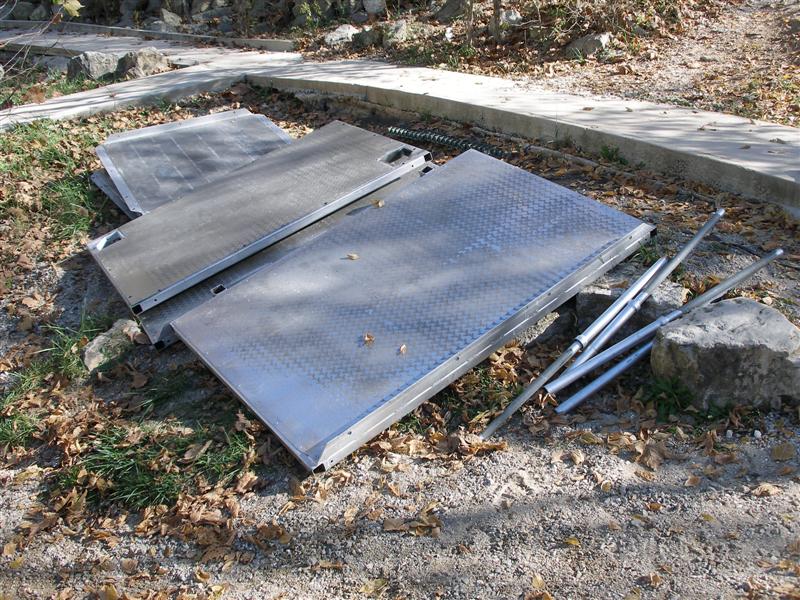 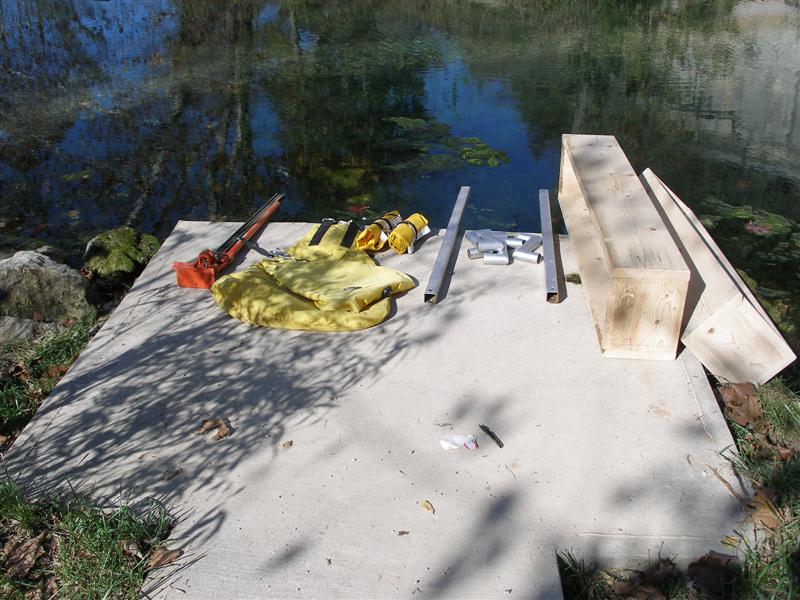 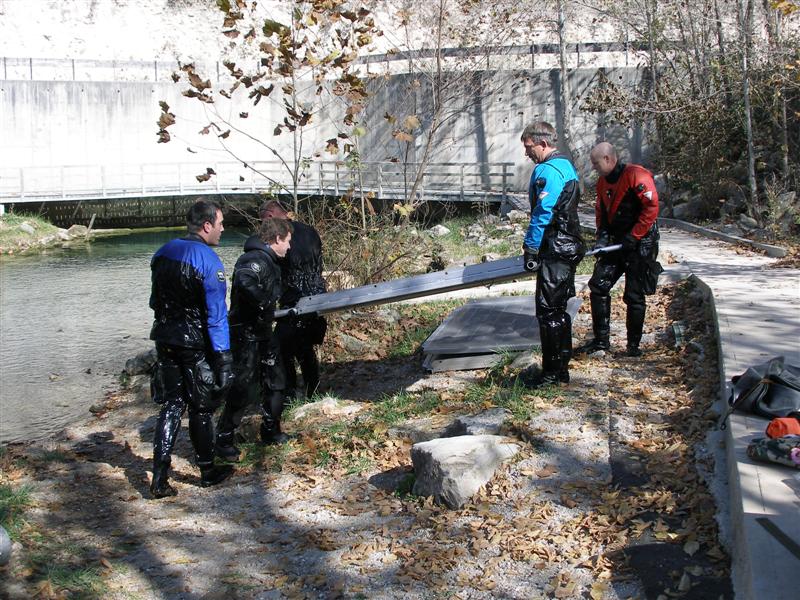 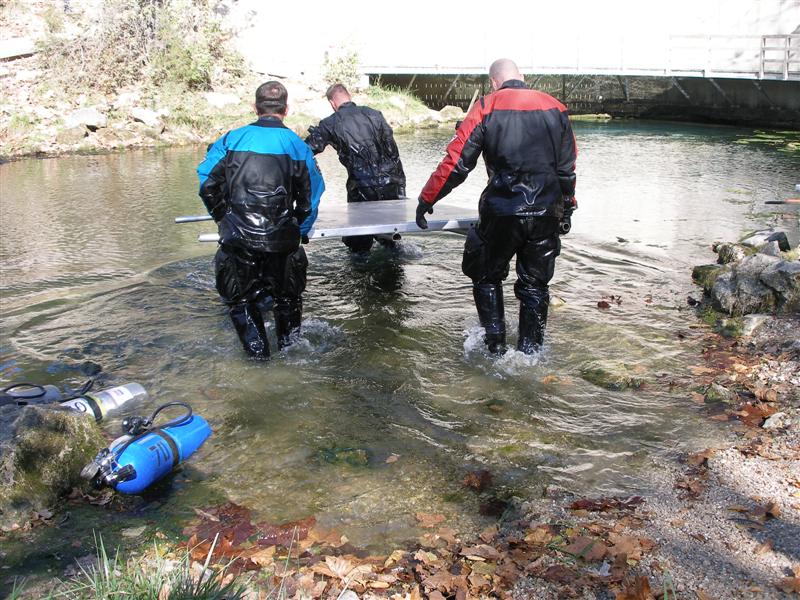 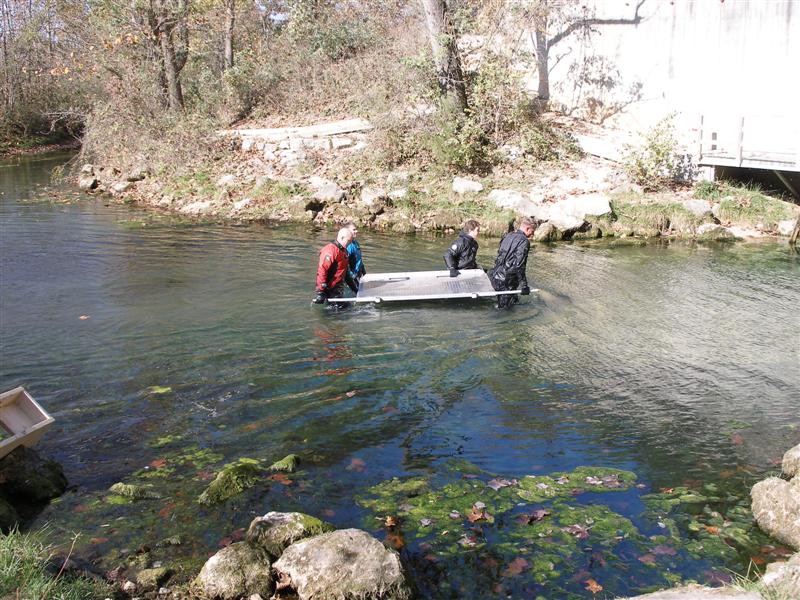 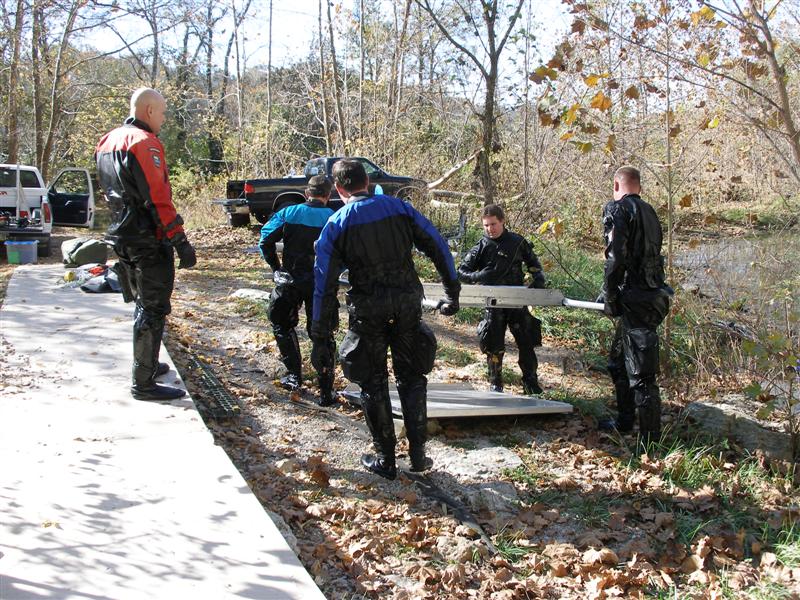 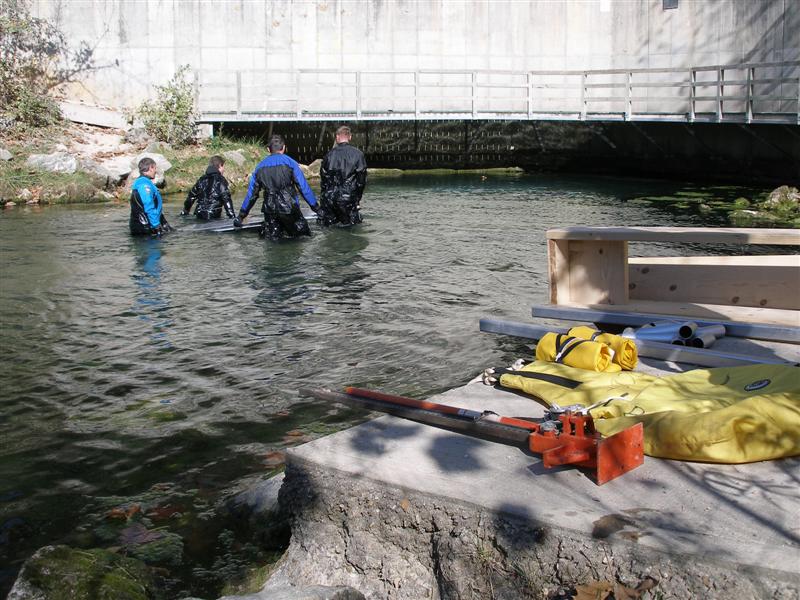 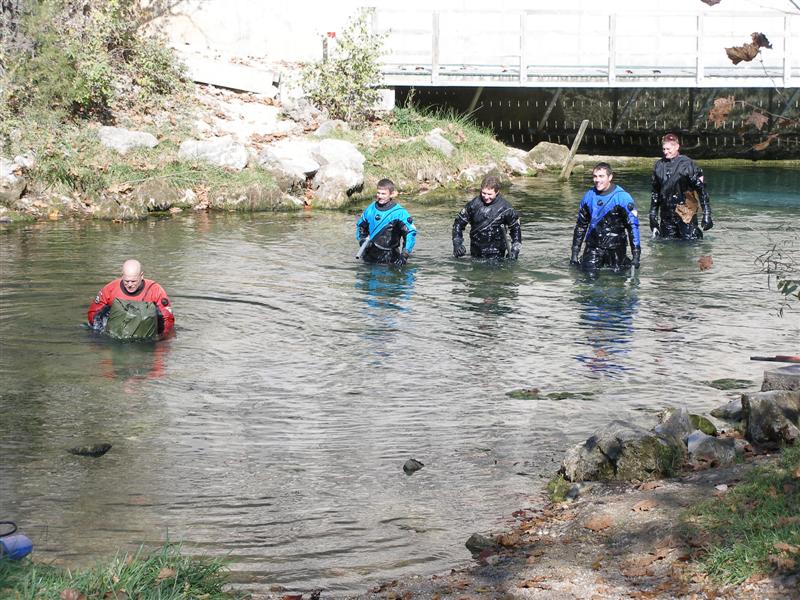 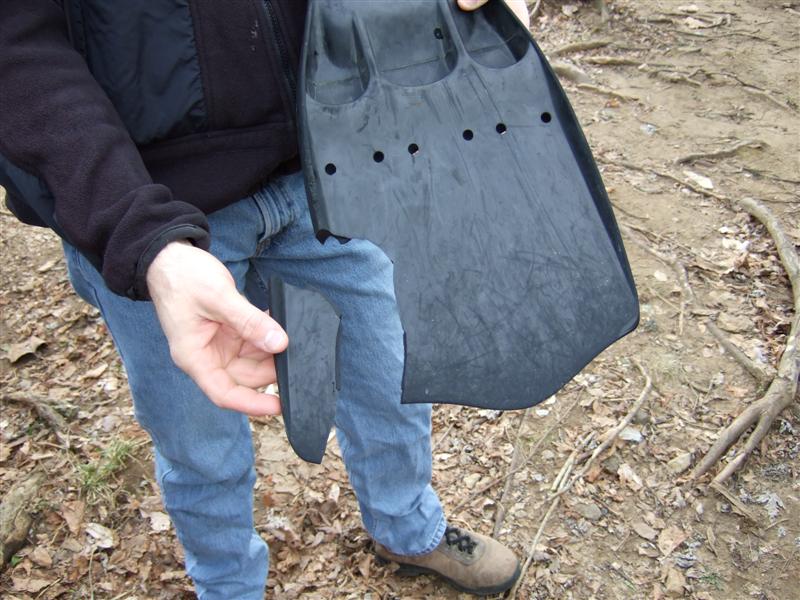 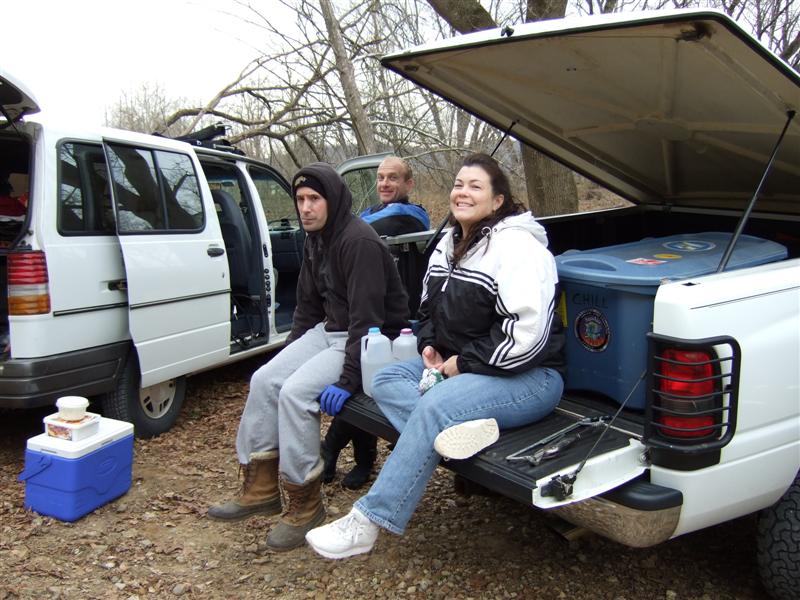 2011 – With dry weather conditions in October, visibility improves to 25 feet and the OCDA begins preliminary work to extend the survey in Roubidoux Spring, including repairing the main line and gathering the last bit of survey data from the line placed by the team in 2002. 100′ of new line is installed on the last dive of the year.

2012 – A hundred-year drought in the Ozarks finally allows conditions to improve enough to give the OCDA a chance to explore Roubidoux spring after a ten year hiatus. Visibility improved up to 30′ and flow was very low. The team makes project dives to set up and explore an addition 2,500′ of cave passage. Total explored distance is now 8,300′, of which 7,200′ of the tunnel is surveyed. The habitat is well-used, and 10 hour dive times are the new norm.

The Ozark Cave Diving Alliance (OCDA) focuses on not just doing things right, but also on doing the right things. This is never more evident than in our extraordinary accomplishments in 2014, marked by significant exploration progress in Waynesville, Missouri at Roubidoux Spring. As we gathered for our final dive 2014 briefing on December 6, we were keenly aware of the possibilities in Roubidoux. This day would either build on the enormous achievements done during the past three months, or it would be an opportunity to remove the safeties and end the team’s exploration diving in Roubidoux for the season. The exploration divers, Dirk Bennett and Ben Perkins were also keenly aware of the significance of this dive, whether successful for a push or an enormous clean up dive. The OCDA has been regularly completing dives over 10 hours in duration during the past three years. Recently, dives have extended past 15 hours, with exploration divers reaching full saturation levels. Dirk and Ben now wore the seriousness of such lengthy dives on their faces as they briefed the team for the day’s plan. Considerations such as emergent gear failures, oxygen toxicity, hypothermia, fatigue, and dehydration are amply covered in the briefing. A lean crew of nine divers was on site for the last day, so everyone’s participation was essential to make the dives a success.

With a balmy 31º surface temperature at 6:30 am, we divided into two support shifts. The morning shift would dive until 3 pm and then trade with the afternoon shift for surface duties. As Surface Manager, Christa Runkle tracked Ben and Dirk’s dive progress and coordinated timing for the support dives that set up initial preparation for the exploration dive and managed the decompression and extraction process. Although Ben Perkins, Dirk Bennett, Kevin Runkle, and Christa Runkle dove the previous day to verify conditions and to set more than 22 cylinders, additional equipment needed to be put in place. Eight safety cylinders had also been set earlier in the season throughout the system. Today, 6 diver propulsion vehicles, additional batteries for heating thermal underwear, food, water, snacks, timers, and a large slate for writing decompression time all needed to be set. By 9 am, Ben and Dirk started in water safety checks and prepared to begin their dive. Twenty minutes later, they were powering through the cave on their first scooter and headed to the end of the line at approximately 10,080’, set only five weeks earlier.

In August 2014, the end of the line was waiting for us at 8,300’. By December, our team reached over 10,030’ and surveyed all the line. The achievements made from July to December in 2014 are significant, considering that the OCDA last pushed the line in 2012 to 8,300’ from its last end of line distance of 5,300’ in 2002. Team members spend enormous amounts of time and resources to achieve goals such as gathering scientific data, surveys, and samples that will be useful for years to come. 24 team members coordinate regionally to help accomplish and document large and complicated dive projects. Steve Gridley, the Team Director, leads with wisdom and insight reminding us that the diver is our most important piece of equipment from which all other equipment is managed. We build our skills throughout the year so that when the spring visibility and flow is manageable, we’re ready to perform. This last push dive in 2014 is no exception to the accumulation of team skill and operations. Conditions held at Roubidoux with 15’-20’ visibility and 55º water temperatures. Flow was increasing throughout the day due to Friday rain, but was manageable. This proved helpful for Ben and Dirk as they exited with the flow for what proved to be a 15 hour 8 minute dive. As support divers, we plan and prepare for the arrival of our exploration divers, but do not know what they experience during their dive until they return to their first decompression stop. We knew that the dive was looking hopeful when they had not arrived by their first dive time at our initial meet and greet. When Chris Hill met Ben and Dirk at the 100’ decompression stop to check on them and to take excess gear, Ben promptly handed off an empty reel that had contained 1,200’ of line, followed by a fist pump and cheering through the regulator. This was a sure sign that line had been laid. After calculating some quick math, we could guess where the end of the line lay, but upon Ben and Dirk reaching the habitat for out of water decompression, we learned that they also managed to survey the line on their exit. Navigating the cave on scooters at the end of a long dive while operating survey equipment is very challenging. Roubidoux Spring has line set and surveyed to an astounding distance of 11,256’ with depths up to 270’. Ben and Dirk emerged at 12:30 am to an eager support team. By 1:30 am, we were sitting together at Denny’s, tired and cold, but honored to be a part of the history of Roubidoux Spring. With improved conditions and some real long weekends the system has now been pushed out to 11,528′ at a relatively modest depth of 145′.

NOTES: Roubidoux Spring is open to certified cavern/cave divers who are required to check in and present their cave/cavern certification card to the officials in the 911 Emergency Center prior to diving. The center is located adjacent to the Fire Station on top of the hill off Highway 66 just east of downtown. There is no diving fee or permit required, but be sure to sign out after diving.  Water conditions vary greatly with local rainfall and can change day to day. Be familiar with and consult the stream gauge before driving a long distance. As with all springs in the Ozark Region, the best time of the year to dive the springs is late summer and fall seasons when the weather is normally dry.