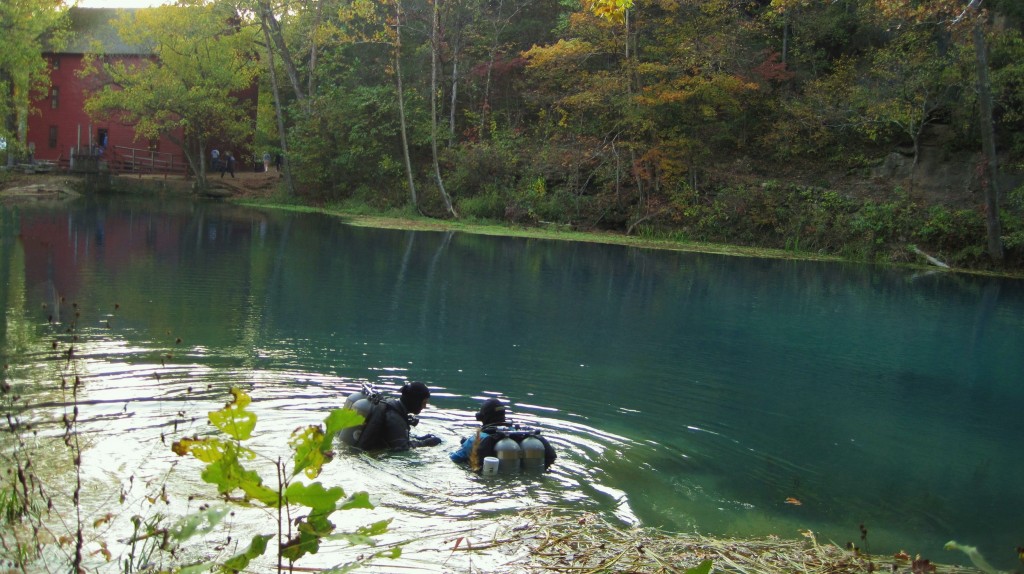 SIZE:  Ranked the 7th largest spring in the state with an average discharge of 84 million gallons of groundwater per day.

OWNERS: Operated by the National Park Service, and included in the Ozark National Scenic Riverways National Park since 1969. Diving is by permit only.

DIVING HISTORY: In 2001 the United States Geological Survey requested the assistance of the OCDA to obtain scientific data from within Alley Spring. To date the team has surveyed/mapped several thousand feet of passage, collected rock and sediment samples, and taken video and photographs within the system. Just under 3000′ of the system has been surveyed with an average depth of 155′. Outbound divers encounter a rapid flyover point in the system where divers come out of 150′ and rapidly  cross the Kentucky Peaks area at 60′ before descending again to 145′. This system is normally affected by poor visibility and high flow. A map is on display inside the Red Mill that was created by the survey information gathered by the OCDA.

NOTES: OzarksWatch Video Magazine hosted by Jim Baker filmed an article on the OCDA and the Alley  Spring project in May 2004 to be shown several times on Ozark Public Television. Watch Ozarks Cave Diving Alliance on PBS. The OCDA has also participated in the Haunting in the Hills event held here by placing divers in the spring who appear as spook lights during the tours after sundown.