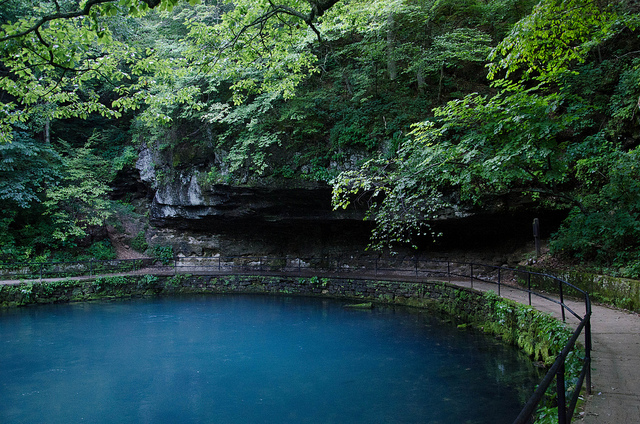 SIZE: Ranked the 5th largest spring in the state with an average discharge of 99 million gallons of water per day.

OWNERS: Privately owned by The James Foundation (http://maramecspringpark.com/) and access to diving is restricted by research permit only.

1978: Pioneer cave divers Roger Miller and Frank Fogarty began exploration at this site in 1978.They explored and mapped the spring conduit out to 1,725′ and found the maximum depth at 195′. This legendary team had no support team and used mixed gases to accomplish their saturation exploration dives.

1995: The dive team of Jason Weisacosky and Charles Merrell begin to dive the system.

1997: The Ozark Cave Diving Alliance comes into being. Flow and visibility is extremely variable within Maramec Spring, and because of higher flow, the OCDA decided to incorporate the use of underwater scooters for future exploratory dives. Spring temperatures average in the low 50’s, which are perfect for the trout hatchery, but rather chilling for long dives. Most springs are on average ten degrees warmer. The group continued their work from late 1996 to cover several thousand feet of passage, while also providing quality video, photographs, surveys, and a map of the system for the park.

1999: The OCDA matures and work continues with a habitat installed to help combat the 50 degree water temp during the long decompression times experienced due to system depths. The spring conduit has now been surveyed and mapped out to 3,006′.

To date the spring has been explored out to 3,800 ft in length and to a depth of 280 ft. Much of the information on this park, like the seven minute video entitled “The Hidden World Beneath Maramec Spring Park,” is on display inside the Maramec Spring Park Museum.

NOTES: Some species of cave fauna were identified here in 1981 after a liquid fertilizer pipeline rupture in the spring’s recharge area drove them out into the spring run due to low oxygen levels.